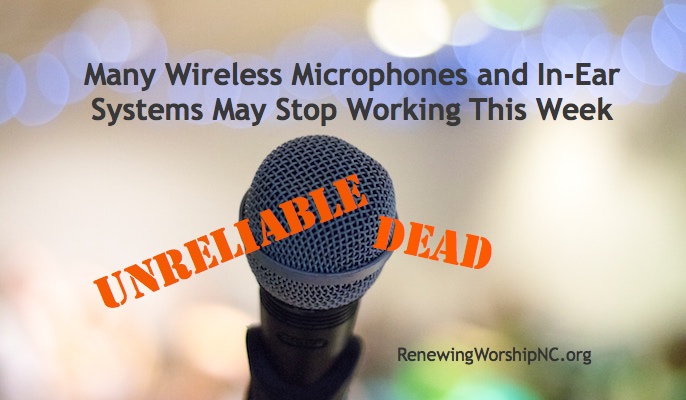 Many church wireless microphone and in-ear monitor systems operate in the 600 MHz frequency. Due to the increasing needs for more of the broadcast spectrum by wireless providers, the FCC recently auctioned off much of the 600MHz frequencies to companies, including mobile phone providers. T-Mobile spent $8 billion on 45% of the licenses and is aggressively expanding for their 5G network in the 600MHz spectrum.

Any of your church’s 600MHz devices that operate outside of a very narrow band of frequencies (listed below) must cease operating no later than July 13, 2020. HOWEVER, these devices may cease to operate effectively at any time depending upon when a wireless broadband company begins to use their newly-acquired frequencies. These companies may use their newly-acquired frequencies at anytime. There are many cases where a microphone worked great one week and the next week the entire 600 MHz system was rendered useless due to a new transmitter coming on line in the intervening week. Don’t assume you are safe to use your equipment until July 13, 2020. Consider it unreliable.

BOTTOM LINE: Replace all your wireless devices working in the forbidden frequencies ASAP. They may not work next week. Seriously.

There are only a few frequencies in the 600MHz spectrum that still may be used for unlicensed wireless operations:

Note that the manufacture, import, sale, lease, offer for sale or lease, or shipment of wireless microphones or similar devices intended for use in the United States that operate on the 600 MHz service band frequencies (617-652 MHz and 663-698 MHz) is prohibited after October 13, 2018.

What will happen to our current audio equipment?

You will first need to check and see if it operates in the 600 MHz spectrum (other than 614-616 and 657-663). If it doesn’t, you have no worries. If it does, first see if your equipment has a function to select a different frequency–one that may be allowable. If not, you will need to replace your equipment. Many companies are offering trade-ins with discounts towards replacement systems. Below is a list of several companies with links to their trade-in/rebate forms and the dates by which you have to comply for the promotion. Promotions run $50 – $500 depending upon the systems. Note that some expiration dates are only a few weeks away.

Don’t delay on taking care of this matter. You may have your equipment fail at a very bad time!

Take a look at the FCC information on the transition here.