The song, Thou, O Lord is published by Prism Music and arranged by Bradley Knight.
Copyright permission was granted for the use of this song and track.

During the COVID-19 period, churches have been looking for ways to keep their choirs and other musician groups engaged despite being sheltered-at-home. Several churches have introduced virtual choir videos to Facebook, their worship streams and more. I have had several questions about how to do this. I decided to venture out and do one myself. Below, you will find my way of producing this video. It could be done in a much more complex and beautiful fashion if I had more time or if I was an expert. Honestly, I had never used this video software before this project, so I was limited in my capabilities. Nonetheless, I believe with some effort, a very useable expression of worship may be produced that will encourage others, build community and provide something you can use in your online worship. Obviously using a group smaller than the 50 that were involved in this project would exponentially reduce the time needed to produce this. ENJOY!

UPDATE: Within a few hours of premiering this video on Facebook, the views and shares are growing exponentially. This makes me aware of how a project like this can reach around the world to bring the hope of Jesus Christ to a world that is looking for hope right now. The outreach impact of this project may be far more than I had first thought. I am encouraging our choir to share this and hold watch parties to reach more people with this powerful message.

First, determine what group you want to involve and the song you want to produce. Will you use live musicians or a track (tracks require additional licenses)?

In this example, I invited the membership of the NC Baptist Singers & Orchestra to participate. Less than 50% agreed to do this (voice parts well represented). We had only a small sampling of instrumentalists participate. I obtained copyright permission from the publisher to use a backing track to fill out some missing parts for the orchestration and used only our voices for the final mix.

Next, you need to set up, with great detail, how your members will prepare and submit their videos.

In this example, I first prepared a video of me conducting the song with the original track (including voices) that would be a guide for participants. They would need to watch the video and have earphone on to hear the track while singing to their phones–this would capture their image and only their voice or instrument. (details below). Note: I added a click to the opening and asked everyone to say “1-2-3-4” on beats 5-8 to help me sync the tracks across the 50 videos.

Secondly, I set up a Google Drive folder for people to upload their completed videos. I used driveuploader.com to make that a bit easier.

Lastly, I prepared a webpage with detailed directions for them:

Here is the guide video I prepared:

While some prefer to mix the audio in the video editor, I prefer to take all the audio and mix it separately in an audio editor. To show this can all be done CHEAPLY, I used Audacity (free). You may have GarageBand or another application you prefer.

First, you will need to download all the video files your people uploaded to the cloud. I chose to strip the audio from the video using VLC software (free). Tutorial here. There are other ways you can do this as well.

Then I dumped all the SOPRANO audio tracks in Audacity and synced them with each other. Using the 1-2-3-4 count made that job much easier. Refer to basic tutorials for using your particular audio software. I would spot check some strong entrances to make sure everyone was in unison and make adjustments as needed.

Now, the fun begins. You take each voice and mix them to be even in volume (or whatever you deem the best mix with your voices). I took advantage of the software to delete a few obvious wrong notes or bad entrances (shhh–don’t tell my choir). I used the balance controls to spatially separate singers so they sound like they are singing from different locations. Once I had the soprano section like I wanted it, I exported a file of the soprano section.

I repeated the procedure with the altos, tenors and basses, resulting in four master audio tracks–one for each voice part. Then I began the final mix. I brought in the commercial instrumental track, all the instrumentalists (in our case, piano, drums, two harps, two trombones, flute/piccolo and a tuba), and the four voice parts. I synced everything with the commercial track. Then I added in our instruments into the mix, making it sound very authentic, but having the commercial track to fill out the missing parts.

I added some reverb to the voice parts to make them seem more realistic for a choir. I deleted lots of “silent” sections in each part to reduce extra noise (in Audacity, you generate silence, not delete).

I worked on the auditory field, playing with the balances of each part. Since we have two harps, I placed one 30% to the left and one 30% to the right. All this helps in the final stereo mix.

Once I had everything like I liked it, I exported the final audio mix to use later in the video software.

Now the real fun begins!! I had used Adobe Premiere Elements on and off for a few years and began the project with that software. I quickly grew frustrated with its clunkiness and slow reaction and decided I needed something more powerful. I discovered DaVinci Resolve, a FREE and powerful video editor. I highly recommend it. I downloaded it and completed the project. I made frequent use of Google to determine how to do tasks in this new software. 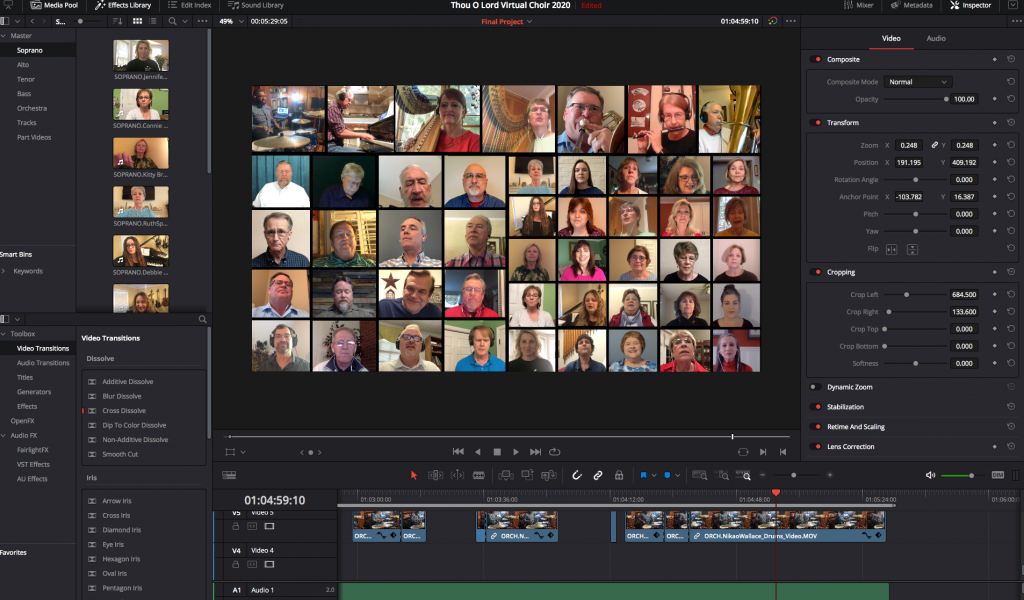 As I mentioned, this could have been done much better than my finished project, but with limited time and capabilities, this is what I produced. Taking time to color correct each video would have been helpful to the final product as well.

First, I determined I did not want just one view for the entire song (50 videos on screen the entire time), but manipulating 50 videos every few seconds would be astronomically time-consuming in the production process! In doing this, I committed to never using just a few singers in a scene–I would use either all women, all men or everyone. (I did black out the altos briefly in a couple of sections to provide a desired effect of entrances).

I then prepared a video collage of all the ladies and another one for all the men. Each had space on the sides that additional videos could be placed. Also, I was able to crop these two scenes to include them together so the entire choir would be seen.

So, I imported all the ladies videos, synced the audio with the master recording, cropped each video to squares and placed them on a 5×5 grid. I cropped the pianist video with just the keyboard and some of the pianist showing and placed it in the space left over on the right side. I checked to make sure everything synced properly and then exported an mp4 of the entire song with just the ladies. This video will be used in the final production. 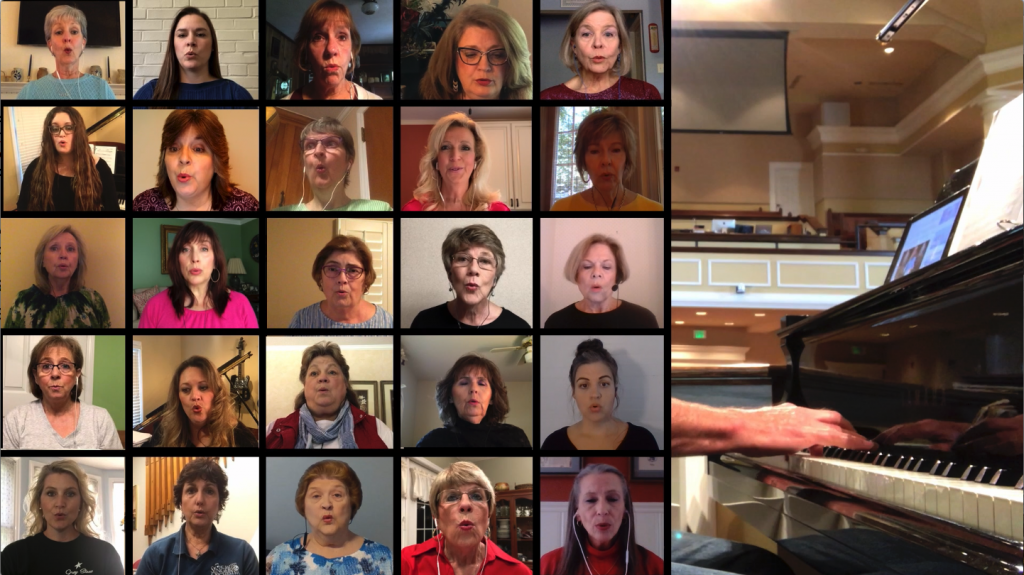 I repeated this process with the men, but added drums and piano to the left side after placing the men in a 4×4 grid. 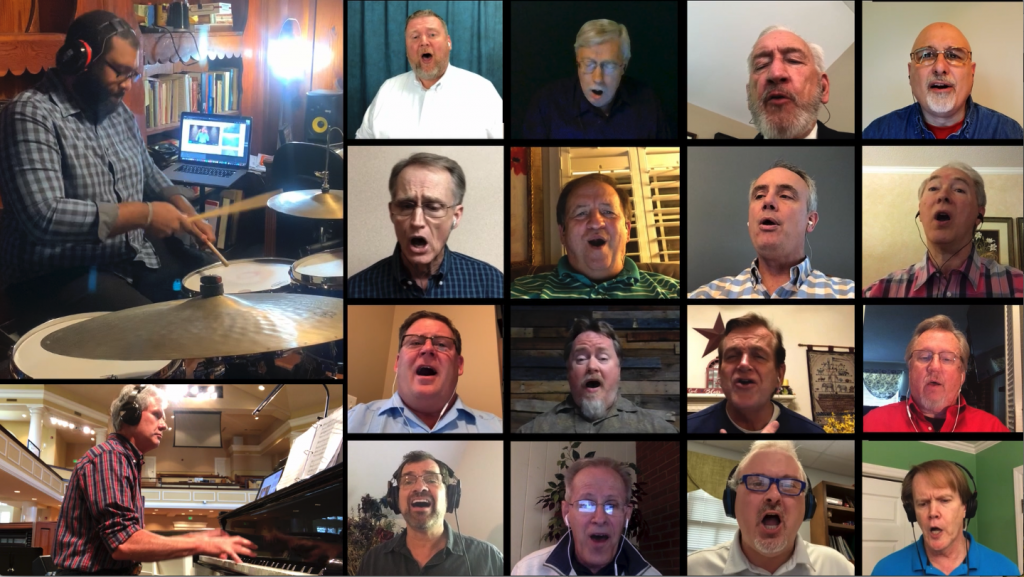 This is a look using just the two videos from the ladies and the men: 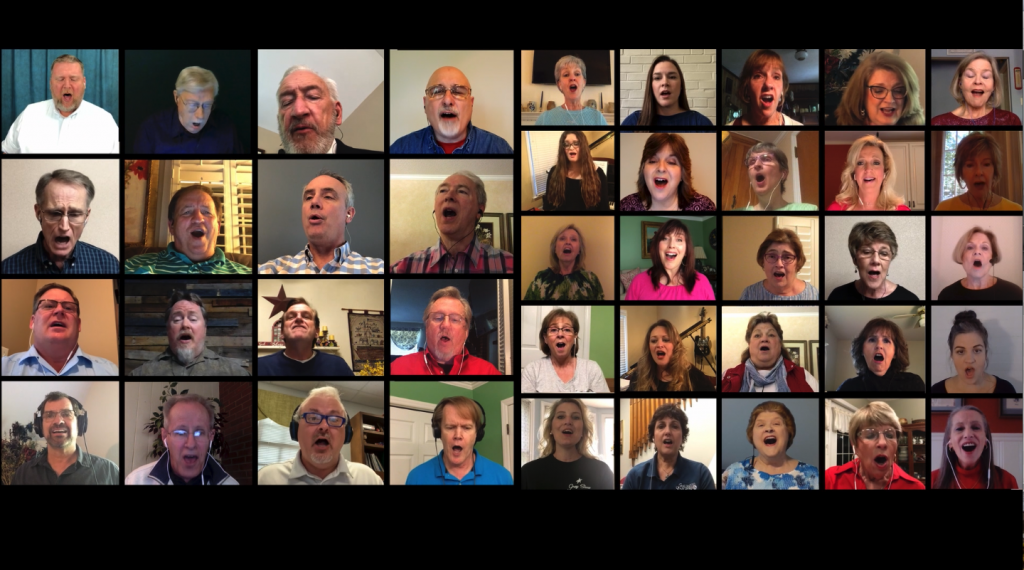 This one adds additional videos of instrumentalists: 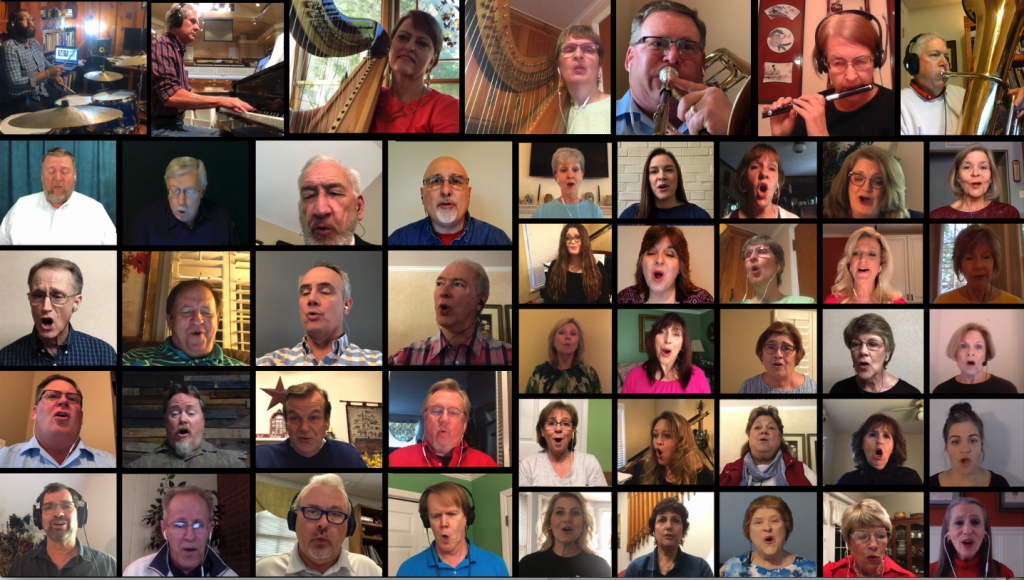 Next, I started a new timeline and dumped the men’s and ladies’ videos in as well as all the instruments. THen I began to design the looks to match the music from beginning to end. I tried to keep things changing all the way up to the final big last chorus where almost all hands were on deck.

Here is an example of a scene featuring some of the instrumentalists: 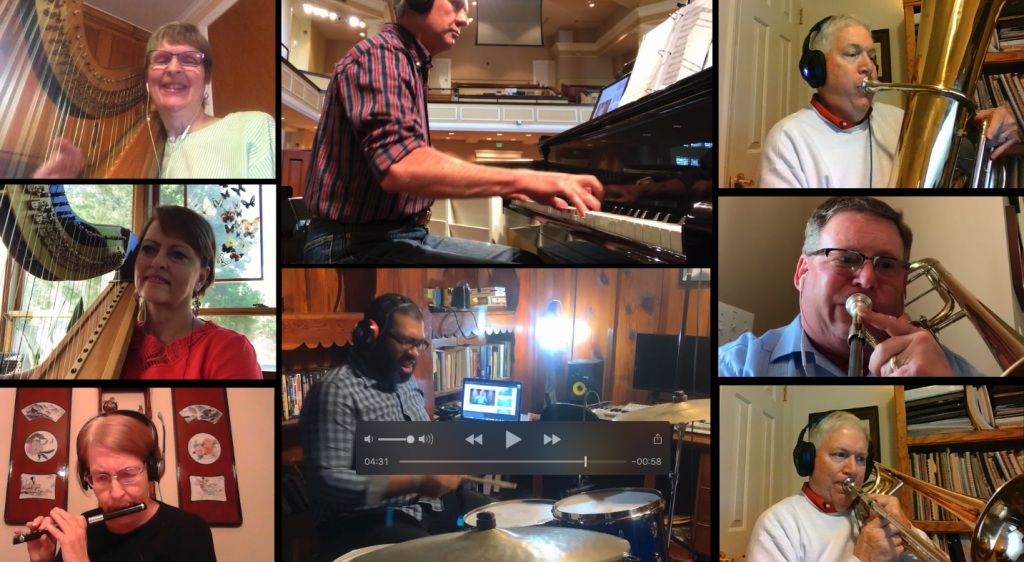 This is the area where much more time could yield a better project. You have to determine how much time you can give to the project and plan accordingly. My decision to make the 25 ladies videos into one and the 16 men videos into one was a huge time saver.

Note: After I synced the videos (using audio waveforms) I deleted all the audio except the master I produced in the audio software.

Once I was satisfied with my product (I added bumper graphics I designed in Canva), I exported the final video, uploaded it to Facebook and scheduled a premiere.

The project certainly takes time to produce. I do feel it builds community at a time when your groups are isolated. I was amazed by how great the group could sound from 50 video recordings taken on mobile phones! I hope this project helps people worship our mighty God throughout the world. 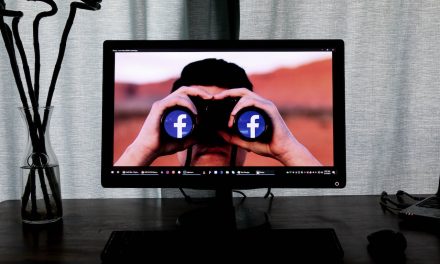 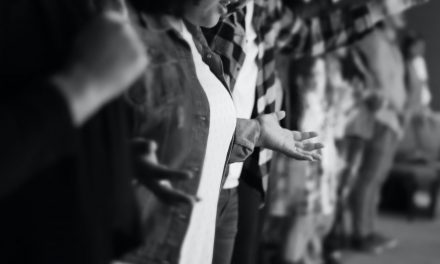 Before You Panic: Thoughts on Congregational Singing and Choirs in Light of the Pandemic 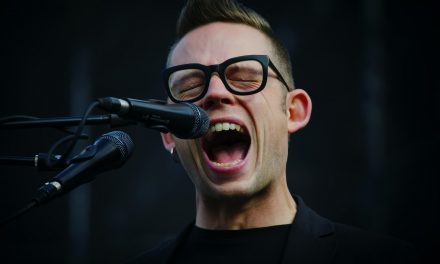 If We Can’t Sing 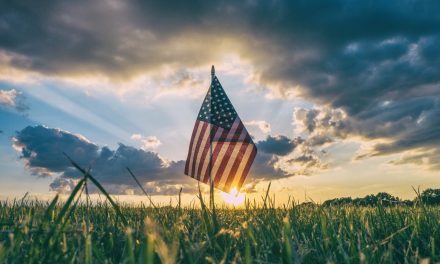