This week, as I continue a series on Lent and Holy Week, I am sharing with you a Good Friday Service that will take some preparation but can be a very meaningful service for your church. Select songs from your congregation’s repertoire that will fit each place in the service. The songs here all come from the Baptist Hymnal (selected many years ago). If you normally use a worship band, I would suggest stripping things down to just a piano, keyboard, or guitar to create a feeling of barrenness in this service.Having a male for narrator one and a female for narrator two works nicely.  Spend much time rehearsing the dramatic portions of this service–especially the movements of the two men robed in black. If you have several entrances to the sanctuary, think of a way to funnel all the traffic through the entrance by the two robed men, or perhaps have one of the men at each of two entrances.

Printed in bulletin:  We welcome you to our Good Friday Worship.  Our service this evening will focus on the cross and the adoration of Christ, the sacrificial lamb.  Our worship is based on two services: the tenebrae (meaning shadow or darkness) from the 12th century and the stations of the cross which comes from the early church in Jerusalem where pilgrims reenacted the final events in the life of Jesus.  At the end of the service, one remaining candle, the Christ candle, will be removed from the sanctuary, symbolizing the death and entombment of Jesus.

Note: as each candle is extinguished, lower the house lights incrementally so that when the Christ candle is extinguished. At the end of the service, bring the lights out just enough for people to depart safely in silence. There should not be any background music at this point. People should depart with a feeling of gloom as Christ’s followers felt after the crucifixion.

PRELUDE: Quiet, reflective music. (As people enter, they walk past two men, robed in black, holding a large cross made of rough-hewn timbers.  The men stand stoically with the cross in the vestibule.)

Leader:  Most merciful God, in silent awe we bow our heads before you. What you endured on our behalf leaves no room for excuses and self-justification, no possibility of repaying the favor. As we keep watch beneath your cross, let us experience the awe that comes from knowing you have loved us with so great a love. Grant us the humility to comprehend how it was that each and every one of us of us made your suffering necessary. Grant us such grace, for Jesus’ sake. In the name of the Father and of the Son and of the Holy Spirit.

All:         Most gracious God, Look with mercy upon your family gathered here for whom our Lord Jesus Christ was betrayed, given into sinful hands, and suffered death upon the cross.  Strengthen our faith and forgive our betrayals as we enter the way of His passion; through Him who lives and reigns with you and the Holy Spirit, for ever and ever.  Amen.

Narrator 2:       Jesus stood before the governor, and the governor asked him, “Are you the king of the Jews?”

Narrator 2:       When he was accused by the chief priests and the elders, he gave no answer.  Then Pilate asked Him, “Don’t you hear the testimony they are bringing against you?”  But Jesus made no reply, not even to a single charge–to the great amazement of the governor.

Narrator 1:       Now it was the governor’s custom at the Feast to release a prisoner chosen by the crowd.  At that time they had a notorious prisoner, called Barabbas.  So when the crowd had gathered, Pilate asked them, “Which one do you want me to release to you: Barabbas, or Jesus who is called Christ?”  For he knew it was out of envy that they had handed Jesus over to him.

Narrator 2:       While Pilate was sitting on the judge’s seat, his wife sent him this message: “Don’t have anything to do with that innocent man, for I have suffered a great deal today in a dream because of him.”

Narrator 1:       But the chief priests and the elders persuaded the crowd to ask for Barabbas and to have Jesus executed. “Which of the two do you want me to release to you?” asked the governor.

Narrator 1:       When Pilate saw that he was getting nowhere, but that instead an uproar was starting, he took water and washed his hands in front of the crowd. “I am innocent of this man’s blood; it is your responsibility!”

Narrator 1:       Then he released Barabbas to them. But he had Jesus flogged, and handed him over to be crucified.

HYMN:   What Wondrous Love Is This  ( stanza 1) (figures move to halfway down the aisle with cross)

Narrator 2:       Then the governor’s soldiers took Jesus into the Praetorium and gathered the whole company of soldiers around him.  They stripped him and put a scarlet robe on him, and then twisted together a crown of thorns and set it on his head.

Narrator 1:       They put a staff in his right hand and knelt in front of him and mocked him. “Hail, king of the Jews!” they said. They spit on him, and took the staff and struck him on the head again and again.  After they had mocked him, they took off the robe and put his own clothes on him. Then they led him away to crucify him.

HYMN:    Oh, How He Loves You and Me (two stanzas)  (figures move to front of aisle)

Narrator 2:       As they led him away, they seized Simon from Cyrene, who was on his way in from the country, and put the cross on him and made him carry it behind Jesus.

Narrator 2:       A large number of people followed him, including women who mourned and wailed for him.  Jesus turned and said to them:

Narrator 1:       “Daughters of Jerusalem, do not weep for me; weep for yourselves and for your children.  For the time will come when you will say, ‘Blessed are the barren women, the wombs that never bore and the breasts that never nursed!’  Then “‘they will say to the mountains, “Fall on us!” and to the hills, “Cover us!”‘  For if men do these things when the tree is green, what will happen when it is dry?”

Narrator 2:       Surely he took up our infirmities and carried our sorrows, yet we considered him stricken by God, smitten by him, and afflicted.

(One nail, right hand, is driven into the cross)

Narrator 1:       But he was pierced for our transgressions, he was crushed for our iniquities; the punishment that brought us peace was upon him,

(Another nail, left hand, is driven into the cross)

(Another nail, foot, is driven into the cross)

Narrator 2:       When the soldiers crucified Jesus, they took his clothes, dividing them into four shares, one for each of them, with the undergarment remaining. This garment was seamless, woven in one piece from top to bottom.

Narrator 1:       “Let’s not tear it,” they said to one another. “Let’s decide by lot who will get it.” This happened that the scripture might be fulfilled which said, “They divided my garments among them and cast lots for my clothing.”

HYMN:    When I Survey the Wondrous Cross  (stanzas 1 & 3) (The cross with nails is raised to standing)

Narrator 2:       One of the criminals who hung there hurled insults at him:

Narrator 1:       “Aren’t you the Christ? Save yourself and us!”  But the other criminal rebuked him.

Narrator 2:       “Don’t you fear God, since you are under the same sentence?  We are punished justly, for we are getting what our deeds deserve. But this man has done nothing wrong.”  Then he said, “Jesus, remember me when you come into your kingdom.”

Narrator 2:       From the sixth hour until the ninth hour (that is, noon to 3 p.m.) darkness came over all the land. About the ninth hour Jesus cried out in a loud voice,

Narrator 2:       When some of those standing there heard this, they said, “He’s calling Elijah.”

Narrator 1:       Immediately one of them ran and got a sponge. He filled it with wine vinegar, put it on a stick, and offered it to Jesus to drink.  The rest said,

Narrator 2:       It was now about the sixth hour, and darkness came over the whole land until the ninth hour, for the sun stopped shining. And the curtain of the temple was torn in two.

Narrator 1:       Jesus called out with a loud voice, “Father, into your hands I commit my spirit.” When he had said this, he breathed his last.

Narrator 2:       The centurion, seeing what had happened, praised God and said, “Surely this was a righteous man.”  When all the people who had gathered to witness this sight saw what took place, they beat their breasts and went away.

Narrator 1:       But all those who knew him, including the women who had followed him from Galilee, stood at a distance, watching these things.

Narrator 2:       Now there was a man named Joseph, a member of the Council, a good and upright man, who had not consented to their decision and action. He came from the Judean town of Arimathea and he was waiting for the kingdom of God.

Narrator 1:       Going to Pilate, he asked for Jesus’ body.  Then he took it down, wrapped it in linen cloth and placed it in a tomb cut in the rock, one in which no one had yet been laid.  It was Preparation Day, and the Sabbath was about to begin.

Narrator 2:       The women who had come with Jesus from Galilee followed Joseph and saw the tomb and how his body was laid in it. Then they went home and prepared spices and perfumes. But they rested on the Sabbath in obedience to the commandment.

THE LORD’S PRAYER (whispered by congregation)

Our Father which art in heaven, Hallowed be thy name. Thy kingdom come. Thy will be done in earth, as it is in heaven. Give us this day our daily bread.  And forgive us our debts, as we forgive our debtors.  And lead us not into temptation, but deliver us from evil: For thine is the kingdom, and the power, and the glory, for ever. Amen.

THE EXIT OF THE CHRIST CANDLE

One of the men takes the Christ candle out through the vestibule and out of sight. The other man remains on the floor.

All depart in silence.  People are invited to remain for prayer and meditation.

[1]Adapted by Kenny Lamm, from William Wells, “A Combined Way of the Cross and Tenebrae Service,”  ed. Webber, Robert E.,  The Complete Library of Christian Worship, vol. 5, The Services of the Christian Year.  (Nashville:  Star Song Publishing Group, 1994.): 363-366.  Additional ideas came from the class group presentation of this type of service in the Northern Baptist Theological Seminary January 1997 class, “The Services of the Christian Year,” Melva Costen, professor.

Take a look at Preparing for Holy Week, Part 3 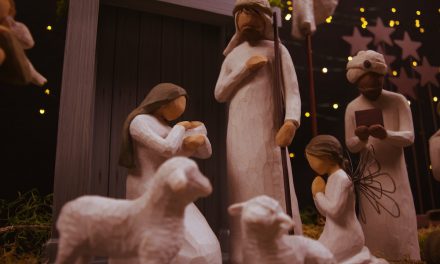 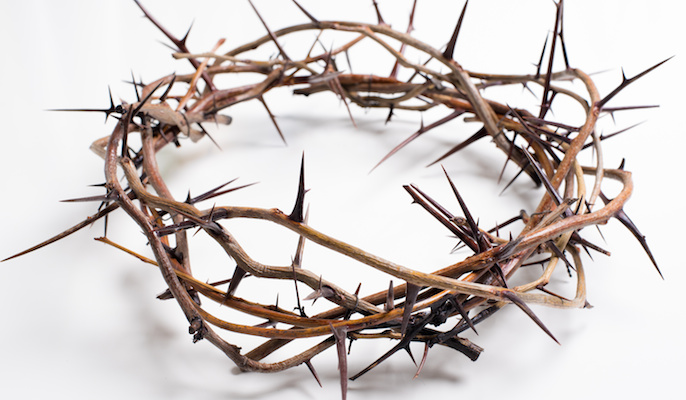